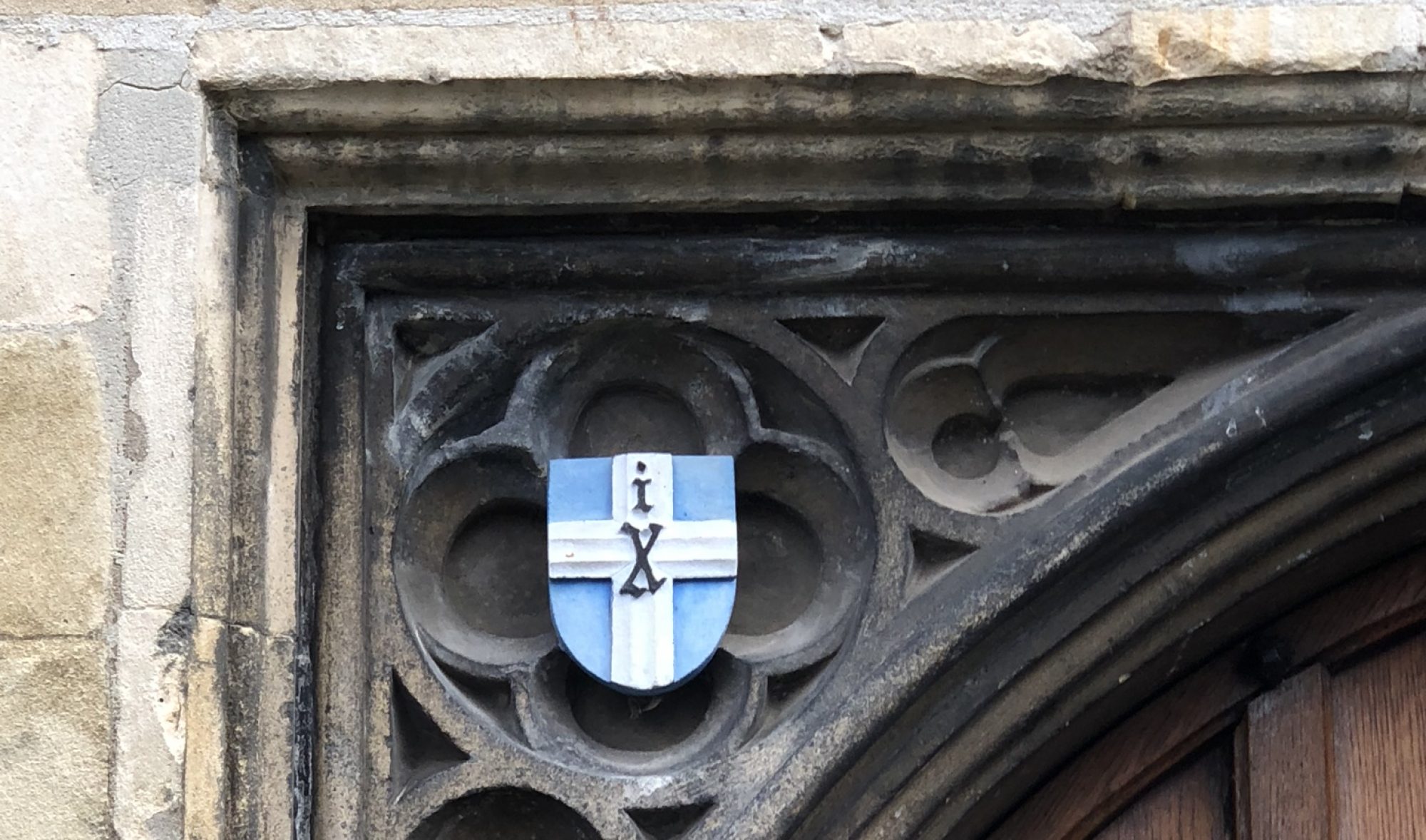 Friends, you will not be surprised that I have already been back to Shakespeare’s Globe…twice. I attended the final performance of Merry Wives of Windsor and another production of A Midsummer Night’s Dream, this time with thirteen members and friends of the Community alongside me. Because of the events of the last two weeks, Titania’s speech about her rift with Oberon causing malevolent weather and harming the human population seemed particularly poignant. Relevant and immediate, like a commentary on the events stirring outside that Wooden O. “[D]istemperature we see/The seasons alter…We are their parents and original,” indeed (II.i.450-486)

Beginning October 7th, on an early Monday morning, members of Extinction Rebellion (XR) and related groups occupied parts of central London until this past Saturday, the 19th. Individuals and families joined these nonviolent but disruptive protests to make powerful people — politicians and corporate leaders, especially — aware of the wide-spread desire for proactive, definitive action to prevent further global warming and climate change. Groups from different cities, regions, and social communities occupied areas around The City, Parliament, Lambeth Bridge, Vauxhall, Trafalgar Square, Gatwick Airport, and more controversially, public transport. Throughout the two weeks, over 1.700 individuals were arrested. Four times, I joined with members of Christian Climate Action (CCA,) a organization sympathetic to, but distinct from, XR. I did so in the midst of and as an extension of, my pattern of prayer and community in St. Anselm’s.

On the eighth, one of my St. Anselm Sisters and I met up with CCA near Parliament, mostly to observe and begin to make connections. We knew that Lambeth Palace was in communication with XR and CCA, but for both of us, adding our bodies and voices to the protest meant a lot emotionally and spiritually. A United Reformed Church priest gave us a tangle of prayer flags. Ever since, they have hung in the Orchard outside our cottages at the Palace. The gardeners, in particular, appreciated a connection between the protest outside and the prayers within.

The next day, we visited the “blanket non-arrestable” camp at Trafalgar Square. We joined in the Anglican service of Morning Prayer, between Nelson’s lions, and in a litany of confession, facing each cardinal direction and recognizing the suffering throughout the world. Since I have studied protest movements, especially those for Civil Rights and Women’s Rights in the mid-twentieth century, I appreciated begin able to both participate and observe. In particular, the infrastructure needed to sustain two weeks of sit-ins impressed me. Unfortunately, warehouses of supplies (including resources for disabled persons) became a target for Police confiscation. Still, families showed up to protest for a day, groups shared their meals and art materials, retirees and pensioners mobilized for the sake of their grandchildren, and workers took weeks of vacation in order to occupy their capital.

The twelfth and thirteenth, I joined a “Grief March” through the retail center of London and celebrated with children’s choirs back at Trafalgar Square. During the march, I ended up with the GroundElders of Devon, senior farmers and gardeners who had traveled together to occupy and, on that Saturday, to march. I helped carry their massive pink banner while they led chants and told me about their farms. Strollers abounded, one woman handed out cups of herbal tea, and drum crews dotted the route. Many dressed in elaborate mourning costumes and carried puppets of the animals facing extinction. That day, we were all “rebels for life.”

In between, my Sister and I designed this Vespers service to bring the concerns of the Extinction Rebellion protest into the quiet of our life of prayer at the Palace. We ended with a candle-lit procession to the Orchard, brightened by its string of prayer flags. “St. Francis pray for us.” “The World is Changing. Why aren’t we?” “The Earth is the Lord’s” “Pax et Bonum” Rains came as we returned to the Palace. Baptism, we called it, God marking us and all creation as God’s own forever.

A Word of Awe from Nehemiah
Blessed be your glorious name, and may it be exalted above all blessing and praise. You alone are the Lord. You made the heavens, even the highest heavens, and all their starry host, the earth and all that is on it, the seas and all that is in them. You give life to everything, and the multitudes of heaven worship you.

A Word of Responsibility from Leviticus
The land must not be sold permanently, because the land is mine and you reside in my land as tenants and strangers. Throughout the land that you hold as a possession, you must provide for the redemption of the land.

A Word of Conviction from Jeremiah
I brought you into a fertile land
to eat its fruit and rich produce.
But you came and defiled my land
and made my inheritance detestable.

A Prayer from Pope Francis, Laudato Si’, 2015
God of love, show us our place in this world
as channels of your love
for all the creatures of this earth,
for not one of them is forgotten in your sight.
Enlighten those who possess power and money
that they may avoid the sin of indifference,
that they may love the common good, advance the weak,
and care for this world in which we live.
The poor and the earth are crying out.
O Lord, seize us with your power and light,
help us to protect all life,
to prepare for a better future,
for the coming of your Kingdom
of justice, peace, love and beauty.
Praise be to you!
Amen.

A LITANY OF CREATION

In the beginning, God created the heavens and the Earth, and the Spirit of God hovered over the waters. God created light and dark, day and night. … God made a vault and separated the water under the vault from the water above it. God called the vault “sky,” and declared it good.
You created and create, called and call, evolved and evolve, inspired and inspire. By Your hand, complex networks of habitats, ecosystems, food chains, migration, and biodiversity spread through the world. You set each of us within this beautiful complexity…but we have sinned against you, our neighbors, and creation. We have abused the good earth you made. We admit our fault, and ask for your help. Bring us together, change our hearts and habits, inspire us to listen to others, inspire our governments and corporations to action, inspire us to love.
Help us. Have mercy, God. Help us.

God called the dry ground “land,” and the gathered waters God called “seas.” The land produced vegetation: plants bearing seed according to their kinds and trees bearing fruit with seed in it according to their kinds.
You inspired diversity throughout the world: forests, rain-forests, fields, deserts, grasslands, tundras, and taigas. Your forests — home to so many species and source of the air we breathe — we have demolished. We have deforested tropical rain-forests, causing a dangerous rise in greenhouse gases, warming our planet, and threatening the lives and traditions of indigenous peoples. For all these sins, against creation, climate, ecosystems, and especially vulnerable peoples, we pray.
Help us. Have mercy, God. Help us.

God made two great lights—the greater light to govern the day and the lesser light to govern the night. God also made the stars. God set them in the vault of the sky to give light on the earth, to govern the day and the night, and to separate light from darkness.
You set the world in motion, giving balance and abundance, establishing a natural order. We have repaid your generosity with greed. As nations, corporations, and individuals, we hoard and abuse your resources. We acknowledge our role — personal and as a species — in the pollution and proliferation of greenhouse gases: the fruit of generations of industrialization, deforestation, and vain attempts to conquer, rather than care for, the world.
Help us. Have mercy, God. Help us.

God created the great creatures of the sea and every living thing with which the water teems and that moves about in it, according to their kinds, and every winged bird according to its kind. And God saw that it was good. God blessed them and said, “Be fruitful and increase in number and fill the water in the seas, and let the birds increase on the earth.”
You gave us the gift of water, formed watersheds, filled craters and vast oceans, caused rain to fall and ice to freeze. You gave life through this water, and in it, we are baptized into life with You. However, we do not appreciate this water and all its teeming life as we should. Sea levels are rising, ocean temperatures and levels of acidity are rising, polar caps and glaciers are losing ice, icebergs are melting, and the coral reefs you made so beautiful, brilliant, and diverse are bleaching white.
Help us. Have mercy, God. Help us.

God made the wild animals according to their kinds, the livestock according to their kinds, and all the creatures that move along the ground according to their kinds. God created mankind in God’s own image, in the image of God, God created them; male and female, God created them.
You brought us into the world You created and loved, and for this we thank You. You entrusted us with the protection of Your creation, of wildlife and animals fit for farming, rearing, and food. You forged covenants with us, creation, and Yourself. We have broken your trust, broken our covenant, and now our brothers and sisters — cheetahs, elephants, green sea turtles, mountain gorillas, monarch butterflies, tigers, giant pandas, snow leopards, honey bees, and polar bears — are in a dire state of our own making.
Help us. Have mercy, God. Help us.

Thus the heavens and the earth were completed in all their vast array. By the seventh day God had finished the work God had been doing; so on the seventh day, God rested from all that work. Then God blessed the seventh day and made it holy, because on it God rested from all the work of creating that God had done.
In creating the world and universe, space and our place within it, You created and create with love and care. You worked and then rested, instructing us to work and rest as well. Now, that we have overworked your creation and abandoned the life-giving pattern of sabbath, keep us from resting until we have restored the safety of Your creation and returned to our proper place within it.
Help us. Have mercy, God. Help us.

The grace of our Lord Jesus Christ, and the love of God, and the fellowship of the Holy Ghost, be with us all evermore.

Day 1 at the Rebellion

Reflecting on the train action: moving forwards together